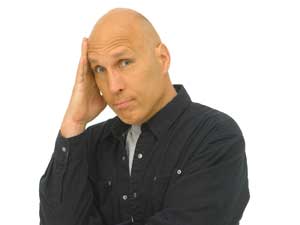 
ABOUT WOMEN & CHILDREN FIRST
“Women & Children First!” Outstanding original comedy!
Who’s better - women or men? And - for the first time - based on facts, not worn stereotypes.


And the winner? (Hint: Rhymes with swimmin’.) Guaranteed huge laughs! New insights, and the audience leaves talking.
Fast-paced multi-media show with video, audio and over 500 stills.


WHOLESOME STAND-UP COMEDY THE WHOLE FAMILY CAN ENJOY
G-Rated, Ages 16 and up.


ABOUT THE PERFORMER
Rex Havens has toured professionally in all 50 states and over 20 countries, in world-famous comedy clubs like The Improv, Catch-A-Rising Star, Funny Bones and Zanies, on television with HBO, Showtime, Comedy Central and Comic Relief, on radio with Bob & Tom and NPR, and cruise ships worldwide.

He’s the author of the hit book and CD “Everything I Needed To Know I Learned From My Wife!”, and “Complete & Total Rex”, both playing regularly on Sirius/XM’s clean comedy channels.

The goal of every show has remained the same for 20 years – for an audience to laugh loud and carefree for 2 hours, go home happy, be glad they came, and to do it in an original way they’ve never seen before.

Favorite and most frequent comment after a show: “I never knew a G-rated comedy could be that funny! I laughed so much my face hurts!” That sums up the purpose of the show – a happy audience in just the right state of facial pain.