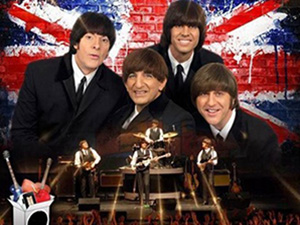 Louise's involvement with the Liverpool Legends makes them the ONLY Beatles Tribute Show with a direct family link to the original Fab Four. “Each member of the group is so close to the originals that I often feel like I'm transported back in time with the lads. These are exactly the kind of fun loving quality musicians that my brother George would have loved to hang out with,” says Ms. Harrison.

The Liverpool Legends have toured all over the U.S. and internationally, culminating with a recently sold out performance in early 2018 with over 23,000 screaming fans in Mexico City, as well as sold out performances in UK, India, Israel and Ecuador.

The Liverpool Legends will be performing songs spanning the entire career from the days at the Cavern with “Please Please Me” to “Let it Be”, on through the solo years. With precise attention to every musical detail, along with costume changes, vintage instruments and special effects, Liverpool Legends will make you feel like you are watching the real thing!

If you are a Beatle’s fan, this is one show you will not want to miss! A full house is expected!

Together, these four lads will bring you “The Complete Beatles Experience.”

The Number #1 rated Beatle Show in the world today!