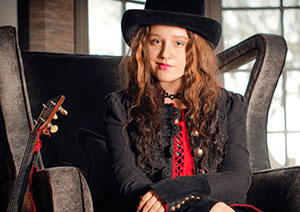 It’s nearly impossible to explain the exceptional talents of EmiSunshine, the 14-year-old prodigy from East Tennessee. It’s the spectacular 2014 performance at a Tennessee flea market that skyrocketed her career to become a worldwide phenomenon when a video of her stage show went viral on YouTube. Since her debut EmiSunshine has performed in festivals, churches and recently appeared on NBC's Little Big Shots in April of this year, with another appearance slated for the summer. The singer, songwriter and multi-instrumentalist is a true vocal stylist. Steeped in Appalachian music, and influenced by legends (Loretta Lynn/ Tanya Tucker/ The Louvin Brothers), she is a throwback to earlier eras of country music when trendsetters like Bessie Smith, June Carter, Loretta Lynn and Hank Williams made history. The sassy, strikingly powerful, ultra entertainer is bound and determined to follow in their footsteps, and while she has some pretty big shoes to fill, this little lady fits the bill.