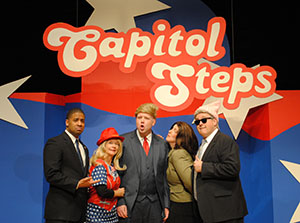 The Capitol Steps have been a national institution for over 36 years, providing a unique blend of musical and political comedy and satire to audiences coast-to-coast. The Capitol Steps make history in the aftershock of the “historical and hysterical” first year and a half of this administration, in their newly subtitled “Orange Is The New Barack" show.

The troupe started in 1981. Since then, they have appeared on The Today Show, Nightline, CBS Evening News and for many years in specials for NPR.

Famous for putting the "mock" in democracy, the Capitol Steps bring laughing tears to the eyes, and have been proven to be much cheaper than therapy.

"They're the best. There's no one like them, no one in their league." — Larry King, CNN