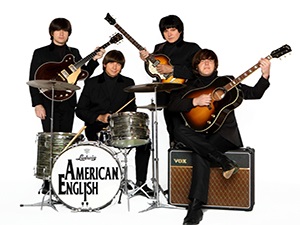 Back by popular demand! American English is simply the best Beatle tribute story of our time. At the inception of the band, they were voted “number one” by thousands of Beatle fans as winners of sound alike contests at Beatlefest® for three consecutive years. They have also won Illinois Entertainer of the Year and have been voted “Best Tribute Band” three of the last four years by their fans in the Chicagoland area. Their demand here and abroad, coupled with their spectacular fan base, has launched them into larger venues and theatres worldwide. Dancing in the aisles is strongly encouraged. So is early ticket buying as this show sells fast!